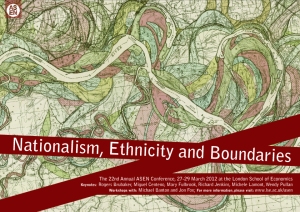 Nationalism represents and advocates for the nation as a special group within humankind; it demands a distinct place for the nation in the world, a territory: the national homeland. With modern nation-state formation the drawing and enforcement of boundaries has become an elaborate part of international relations. Disputes arising from claims over boundaries both originate and intensify nationalist assertions and actions in pursuit of such claims. One central concern of this conference is the origins, formulation, pursuit, enforcement and conflicts related to national boundaries.

The drawing of physical boundaries is but one aspect of a deeper sense of national boundary making. The national self only makes sense set against the non-national other. The second thrust of the conference is social and symbolic boundaries. Citizenship rules, symbolic representations of the national, practices of discrimination highlight and enforce many kinds of boundaries which often cut across the physical boundaries of nation-states and national homelands. Often, these boundaries are forged inadvertently from the bottom-up through the everyday practices of, and interactions between individuals.

A third focus-point of the conference is the fluidity of boundaries. There are many non- national boundaries which may not align with those of nation and ethnicity. Boundaries are fluid and what at one time is a boundary which gives rise to fierce conflict can at another time either be forgotten or transformed into a site of agreement and reconciliation.

These are important issues in the fields of ethnicity and nationalism, and although there is a large and recent literature on border and boundary issues, the work to date remains disconnected and under-theorised. The conference offers an opportunity for academics to share and discuss the most recent scholarship in this emerging area of study in the fields of ethnicity and nationalism. The three-day conference will explore historical, contemporary and policy related aspects of these various interrelated issues while focusing on the dichotomy between physical and symbolic boundaries and their interactions.

Proposals are invited for papers focusing on the following themes:

Abstracts should be submitted online no later than November 6, 2011.

To submit your abstract, please follow this link: http://www2.lse.ac.uk/researchAndExpertise/units/ASEN/Conference/Abstract.aspx Sucessful submissions will be announced in December, 2011.